“Hold never in scorn the hoary singer; oft the counsel of the old is good; come words of wisdom from their withered lips …“

In my last blog on ancestral storylines, I mentioned that my mother and I had agreed to visit my great-uncle in November, when I visited Puerto Rico, in order to straighten out some of the confusing family legends that we weren’t clear about. We were concerned that if he died, we would lose the chance to get the story straight, and maybe find out with certainty who some of our ancestors actually were.

Uncle Rosario is 95 and obese, sits in a wheelchair and can’t see very well, but is very lucid and loves to talk and tell stories. I sat in front of his wheelchair and, with the air of an investigative journalist, took notes while my mother and cousin–who eagerly drove me to see him–had parallel and related conversations in the same living room with Rosario’s daughter, who takes care of him.

You may remember that I mentioned a Catalonian by the name Jaca who was proposed as my ancestor on ancestry.com, but one of my cousins disputed that we were not related by blood to him. This is the thing about demographics research versus DNA research: very often, people are adopted, or people remarry, and the parental identity of an ancestor comes into question.

Uncle Rosario cleared up the matter for me: we are NOT related to the Jaca family, but Mr. Jaca was the adoptive father of my great-great-grandmother Alejandrina (Lala). Mr. Jaca actually died in Rosario’s house. He had come from Spain–where he was born in the 1850’s according to census data. Rosario says he had come to the Americas fleeing a war in Spain.

In my previous ancestral blog, I was speculating that we had French ancestry. Rosario tells us that my ancestors Juan and Lala, his mother, “spoke French just as fluently as we’re speaking Spanish” in their household, and Rosario even remembered a few French words. Dominga (Lala’s mother, who was of pure African stock) arrived in Puerto Rico when Lala was eight years old from the Netherlands, according to Rosario (he used the word “Holanda“, or Holland), and Lala’s birth father came with them to work in the train tracks “in Arenales” (a neighborhood?). The French were building the railroad (“el ferrocarril“) in Puerto Rico–presumably to help with sugarcane harvesting and transporting–and hired him.

Dominga was a free Black woman and a “housekeeper” according to Rosario (“ama de llaves“), and when Lala’s father returned to Holland (leaving her some money), Mr. Jaca fell in love with Dominga and they had more children. He helped to raise Lala as if she was his own daughter. Rosario remembers Lala (Alejandrina was her birth name), and says she was very black and had a very big behind (“era bien prieta y culona“).

I asked Rosario why, if her father was from Holland, Lala spoke French instead of Dutch, but he didn’t have an answer for that. Instead he took a detour into the issue of early nationalism in Puerto Rico, and said some things that cast history in an interesting light. Of course, the name we inherited from our mothers (as their children were not recognized by their fathers)–Lasalle–is French, and Dominga and Lala must have experienced French colonialism and acquired the French language wherever they acquired this name.

Uncle Rosario says that my great grandfather Juan spoke French, which he learned from his mother Lala, partly, in order that their overseers (who were so-called “nationalists”) would not understand what was being said (“para que los capataces no entendieran“–I looked up the archaic word capataz, it means “foreman” or “supervisor”). They spoke in code.

Why? The reason for this–Rosario says–is that our ancestors were against the nationalists, who were for the most part (perceived as?) Spanish. Keep in mind that, when Rosario was growing up, the United States had recently annexed Puerto Rico after the Spanish American War, and the Spaniards or loyalists on the island bred a resentment not too different from how some whites in the South still view the north. Nationalism, he says, was a Spanish invention, and it’s true that many on the island today still perceive the Puerto Rican independence movement as a white and Spanish ideology. There have been very few dark skinned nationalists on the island.

Rosario says that the Americans entered the island from Guánica (in the south), and that they were well received. He said: “los esperaron con ramos de flores” (= they waited for them with flowers). When the Americans arrived, the Spaniards feared that their exploitative schemes would be dismantled, which in fact they were. He says: “Y la industria y los ricos se fueron pa Lares” (= “Industry, and the rich, went to Lares”). Lares is the mountain town where the cry for independence had been heard in the late 1800’s. This was known as “el grito de Lares“, where the word “grito” also has the sort of nuance of “rebel yell”. Rosario said: “el Grito de Lares fue de los españoles, no fue de los puertorriqueños” (= the “Lares revolt was of the Spaniards, it was’t by the Puerto Ricans”).

There’s more: We must keep in mind that Dominga and Lala (our side of the family) were black, and that Lala’s son Juan (my great grandfather) was an illegitimate child. Rosario told me a story that sounded like the type of racism that took place in the American south long ago. Uncle Rosario told me that Sarito Jaca (half-brother of great-grandmother Lala’s Catalunya-born adoptive father) and “the Naga” (a local family?) were “españoles malos” (evil Spaniards) who orchestrated to take away the land that Lala would have inherited in the rural region of Guajataca. He says they even went as far as burning their house “y se fueron con los Rodríguez” (= “and they went with the Rodríguez”, which I suppose means that my ancestors had to move in with the Rodríguez family). They finally made our ancestors sign away their plot of land (“la finca“) in Guajataca, which Dominga had originally wanted to be Lala’s. It ended up going to the Jacas, who were my ancestors’ half-siblings or adoptive relatives by marriage to Dominga. This is a view of Lake Guajataca. 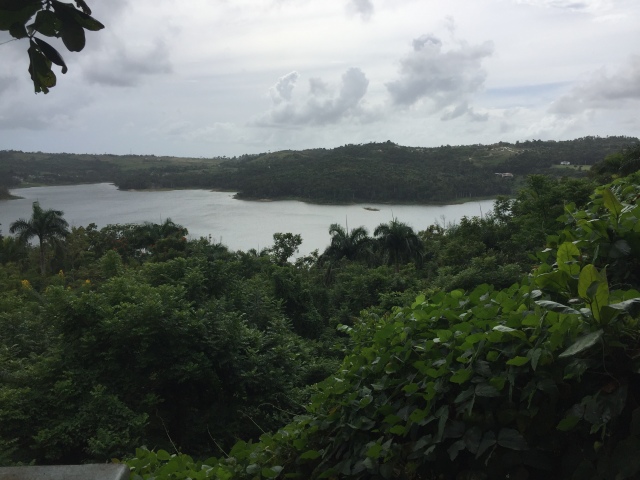 Many decades and a couple of generations after these historical facts, the Jaca family was involved in inheritance-related controversy again. I believe this was in the 80’s–my mother remembers this being in the news for weeks when it happened. One of the Jacas (nicknamed “Goyo”) killed his son in order to get money that his father (his son’s grandfather) had given him to inherit, as the boy had been raised by his grandfather.

It’s not my intention, in writing these storylines, to present American colonialism as a necessarily more benign form of colonialism than Spanish colonial oppression–in fact, in the past I wrote a book review on War Against All Puerto Ricans, which eloquently covers the evils of American imperialism and its effects on our people. I don’t really have any guarantees that Rosario’s stories were lacking in his own ideological nuance, or that the “holandés” (rather than the more obvious French or Belgian, considering the language they spoke) attribution to Lala’s father is accurate, but he seemed absolutely lucid and knowledgeable throughout our conversation and I feel that I have no reason to doubt his narrative. Plus, he is closer to the events than anyone else alive today in my family. He was also sweet, affectionate, and kind, and I will forever be thankful for his words.

We took a detour and drove through the mountain region of Guajataca that day, where my mother had many memories, and knew the people that had lived in many of the houses that we drove past. This is one of the pictures I took that day. We would have inherited land here if the Jacas had not had their way. Below, you can see Lake Guajataca.

The house in this picture is where my great-grandparents Juan Lasalle and his wife Cola (Nicolasa) had lived, and where my orphaned mother spent some of her early years.

Cattle die and kinsmen die,
thyself too soon must die,
but one thing never, I ween, will die:
fair fame of one who has earned.

Above, I took a picture of a street that bears my grandfather’s name. Below, a street that bears his father’s name, the Juan Lasalle mentioned above. Back in the day, due to Catholic taboos against family planning, people had many more children than they could afford, as a result of which I have hundreds of cousins, most of whom I don’t know, and almost everyone in the area informally known as “el Sector Lasalle” in Quebradillas is related.

Unfortunately, just after the Day of the Dead the oldest one of my generation in the Lasalle clan died. He was actually named after my great grandfather: Juan Lasalle (we all knew him as Johnny) died in Louisiana shortly after receiving the visit of his sister and father. My aunt Abe has now buried two of his sons. He was 58. RIP. I took a picture of the street sign bearing great grandfather Juan Lasalle’s name.

As for the open question (brought up in the previous ancestry blog) on whether Sico (Francisco) Hernández was (old) Juan Lasalle’s brother and whether Juan Hernández was his father, I asked Rosario and he simply said he couldn’t tell me. As far as he knows, Juan’s father is a John Doe. He also repeated the anecdote that was shared by a cousin of my mother’s when I asked about this in our family’s Facebook page: women–particularly Black ones–were often raped in the haciendas back in the day.

I gathered a few more side-stories about uncles and rumored siblings of our ancestors, but I’ll end this blog here.

“If you cannot get rid of the family skeleton, you may as well make it dance.” — George Bernard Shaw

Hiram Crespo is the author of 'Tending the Epicurean Garden' (Humanist Press, 2014) and 'How to Live a Good Life' (Penguin Random House, 2020), and founder of societyofepicurus.com. He's also written for The Humanist, Eidolon, Occupy, The New Humanism, The Secular Web, Europa Laica, AteístasPR, and many other outlets.
View all posts by hiramcrespo →
This entry was posted in culture and tagged ancestors, puerto rico. Bookmark the permalink.