Happy Twentieth: Lucretius on Iron and War, and some Updates

Happy Twentieth to Epicureans everywhere! During the month of February in Athens, Epicureans from all over Greece got together for their annual symposium. As is customary, I sent a message of solidarity on behalf of the Friends of Epicurus. Here is the full report of the symposium in English.

This month the essays about Nietzsche’s Will to Power went live on the Society of Epicurus page, and I was introduced to an intriguing discovery: YANG CHU, the Taoist hedonist sage who authored the seventh chapter of Lieh Tzu. This chapter has been translated into English as Yang Chu’s Garden of Pleasure: a literary and philosophical treasure trove filled with wise parables and teachings that many Epicureans will likely end up considering an important source of inspiration and guidance.

Look for my article on euthanasia on TheHumanist.com. A new self-guided and self-paced study curriculum (which covers the entire corpus of our tradition) is live on the SocietyofEpicurus.com page for the benefit of philosophy students, and the Spanish version also. We are also celebrating the growth of the Society of Friends of Epicurus: Matt Jackson is our newest member. He lent his voice to the introductory video on our youtube channel.

And finally, I was invited to discuss Epicurean philosophy at a high school philosophy club, and had a great experience interacting with brilliant young minds about hedonic calculus and about choices and avoidances.

This month I’ll share a passage from De Rerum Natura on how war expanded to an industrial scale after the discovery of iron. The passage raises questions about technology and how we should apply it to the end that our own nature seeks: Pleasure. There is a Yoruba legend that says that the only being in the universe who could tame the warrior Ogún was the most beautiful of the Goddesses, Oshún (the African Aphrodite), who would smear herself in honey and dance naked for him, enchanting him and making him do her bidding for the sake of peace and prosperity in the land. If Ogún is “sweetened”, rather than wage war or remove his skills from civilization, he would use his skills for sweetness, diminishing the brute labor required from men and beasts by making machines and weapons that make life easier. So it’s an interesting Epicurean commentary on this archetype: by offering its skills to the service of Oshun (i.e. Pleasure), all of civilization and all of society is helped! In De Rerum Natura, we also see that Mars stops his displays of aggression and his fighting, and gently surrenders to Venus in the opening poem. 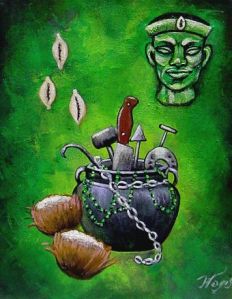 The month of March takes its name from the god of war, Mars. The Lucretius passage on how the invention of iron exacerbated man’s violence and made warfare on a larger scale possible reminds me of an African War God known as Ogún, whose counterpart is Hephaistos / Vulcan in the classical pantheon.

Ogún is a warrior god and the spirit of iron. He is associated with train tracks, iron, smithwork, and really he is the orisha associated with all technology and mechanics. The Yoruba people (and their Lucumí counterparts in the island of Cuba) believe that Ogún never tires and is constantly working. This is because he is associated with, or embodied in, the tools used to work the land. Many Yorubas believe that without Ogún, advanced civilization would be impossible.

But he’s more than the Divine Mechanic. They also believe that war would be impossible without him, and in fact Ogún is also the Voodoo god in whose honor the people of Haiti offered a sacrifice at the onset of the island-wide bloody slave revolt that eventually led to Haiti’s independence. Voodoo faithful believe that Ogún is the orisha who liberated them from slavery.

Now, Epicurean doctrine teaches that anything that secures our safety and our life is a natural good. The good side of this archetype is that chariots and weapons allowed many who were defenseless before to not succumb to tyranny, and to defend themselves. In Lucretius, a secular humanist evaluation of the association between iron and warfare is explored. The passage ends explaining how Discord multiplies the horrors of war.

How nature of iron discovered was, thou mayst
Of thine own self divine. Man’s ancient arms
Were hands, and nails and teeth, stones too and boughs-
Breakage of forest trees- and flame and fire,
As soon as known. Thereafter force of iron
And copper discovered was; and copper’s use
Was known ere iron’s, since more tractable
Its nature is and its abundance more.
With copper men to work the soil began,
With copper to rouse the hurly waves of war,
To straw the monstrous wounds, and seize away
Another’s flocks and fields. For unto them,
Thus armed, all things naked of defence
Readily yielded. Then by slow degrees
The sword of iron succeeded, and the shape
Of brazen sickle into scorn was turned:
With iron to cleave the soil of earth they ‘gan,
And the contentions of uncertain war
Were rendered equal.
And, lo, man was wont
Armed to mount upon the ribs of horse
And guide him with the rein, and play about
With right hand free, oft times before he tried
Perils of war in yoked chariot;
And yoked pairs abreast came earlier
Than yokes of four, or scythed chariots
Whereinto clomb the men-at-arms. And next
The Punic folk did train the elephants-
Those curst Lucanian oxen, hideous,
The serpent-handed, with turrets on their bulks-
To dure the wounds of war and panic-strike
The mighty troops of Mars. Thus Discord sad
Begat the one Thing after other, to be
The terror of the nations under arms,
And day by day to horrors of old war
She added an increase.

Hiram Crespo is the author of 'Tending the Epicurean Garden' (Humanist Press, 2014) and 'How to Live a Good Life' (Penguin Random House, 2020), and founder of societyofepicurus.com. He's also written for The Humanist, Eidolon, Occupy, The New Humanism, The Secular Web, Europa Laica, AteístasPR, and many other outlets.
View all posts by hiramcrespo →
This entry was posted in god and tagged hephaistos, iron, ogun, war, warfare. Bookmark the permalink.